On the night of January 6, 2016, Kevin Baranowski, founder of the Luca John Foundation, and Janet Dybek, the State Director for Colorado’s operations, interviewed with the Denver Press Club. The following is a summary of the event and includes a full recording of the podcast.

The show opens up with Rob Scoggins Jr. of the Denver Press Club introducing Kevin Baranowski, the founder of The Luca John Foundation. We are briefly taken through the Baranowski’s early years in establishing the foundation, and the good work Kevin, his wife Nickie, and his team have been able to accomplish over the decade since opening its doors. Though its focus remains in North America, the Luca John Foundation has received international acclaim and vocal support from many influential religious figures and political weight-lifters such as Pope Benedict, Charles Philip Arthur George (Prince of Wales), and Malcolm Turnbull (Prime Minster of Australia).

Kevin explains how the foundation’s mission is twofold. One avenue is providing a support network and funding for organizations that help increase survivability and the quality of life for children diagnosed with skeletal dysplasia. The second part is offering counseling and bereavement assistance to those families who have lost a child up to one year of age. 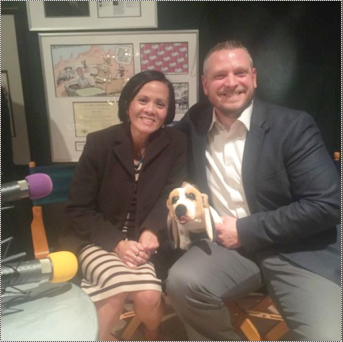 Kevin then opens up about his family’s experience of losing their own son, Luca, to a fatal form of Skeletal Dysplasia, a diagnoses they received from an ultrasound at just 22 weeks of gestation. Kevin and Nickie were devastated and, due to the lack of resources available, confused about what had happened to their baby.

At 23 weeks, after countless hours of research and many sleepless nights, Kevin and Nickie were faced with one of the most difficult choices, go to term or end the pregnancy. If carried to term, the stress of the pregnancy could cause catastrophic health problems like preeclampsia and possible cardiac arrest. So, with heavy hearts, the Baranowski’s decided to proceed with an early induction. Little Luca lived only 90 minutes, but in that short time, he was showered with a lifetime of love. It was then that Luca’s life inspired a legacy and shaped a new mission to light the way for other families affected by Skeletal Dysplasia.

Digging deeper into the details of their son’s disorder, Kevin explains that skeletal dysplasia is not just dwarfism. There are over 300 different types of skeletal dysplasia, almost all of them fatal, and, because of the relative rarity of skeletal dysplasia, scientists have studied less than 10% of them. In fact, Luca John’s diagnosis was so rare, he was only the 31st known case in the United States. Due to this void in the information chain, many families are left feeling helpless and largely without answers in the face of a very frightening diagnosis. When Luca John, was diagnosed with skeletal dysplasia in 2006, Kevin and Nickie were one of these families.

Since then, there has been slow advancements in research concerning this condition, specifically in California. There is now a “Luca” gene of the specific dysplasia which Luca had, but to this day there is no genetic testing available for most forms of dysplasia. This imperative is the reasoning behind the foundation’s secondary mission, to support research and provide medical grants. Kevin is happy to report that many doctors have begun to reach out directly to the foundation, looking for such assistance.