A charity founded by a central New Jersey father in the memory of his son is teaming up with a company that makes teddy bears to offer a small comfort to grieving families. The Luca John Foundation, which was featured in U.S. 1’s December 17, 2014, Helping Hands issue, supports families of children with skeletal dysplasia. Now it has formed a partnership with Patchwork Bear to provide teddy bears to families who lost infants to the disease. 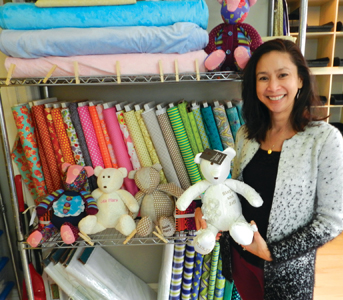 The Patchwork Bear will now add to the services that the Luca John Foundation provides by donating teddy bears made out of clothing or blankets that belonged to the child.

“Suffering the loss of an infant is an unimaginable tragedy. It is in those times that we often feel alone and scared. While these bears will not bring back a lost love, by using the child’s clothing we hope they provide a small sense of comfort” said Luca John Foundation president Kevin Baranowski.

Baranowski and his wife, Nickie, founded the group after their son died of a rare form of skeletal dysplasia, a bone disorder, in 2006 just 90 minutes after his birth. He now runs the foundation from his Ewing home.

The Patchwork Bear is a Nassau Street-based toy company that makes handmade teddy bears out of baby clothes, wedding dresses, or articles of clothing from a beloved person who has died.

Families working with the Luca John Foundation will receive a kit from Patchwork Bear. Parents can put a few pieces of clothing or a blanket belonging to their infant in the kit and send it back to Patchwork Bear, where the bear is made.

The connection between the two organizations runs deep.

Jennifer Cura grew up in New York where her mother was a psychiatric nurse and her father was a biochemist. She was working as an architect in Princeton in 2005 when she first had the idea for her business. She had recently served as a surrogate mother for her sister’s child, and was on bed rest because of the pregnancy. She wanted a job that would allow her more flexibility to recover and to parent her own three children. “I started making quilts and bears out of regular fabric, and I ended up taking old clothes and making a bear out of it, and it just clicked,” she said.

At first Cura designed the teddy bears as keepsakes of childhood, made out of old children’s clothes. She moved to Los Angeles later that year, and the business started to gain momentum. Soon she was making teddy bears for several celebrity clients. “I got lots and lots of publicity, and the business really took off,” she said.

The business soon expanded its offerings. “It started off more as a baby keepsake than a memory bear, where you send in clothing from a loved one,” Cura said. One day a customer came to Cura and asked her to make a bear out of the clothing of a loved one. Cura, realizing the emotional power of such a keepsake, soon added memory bears to her line that has since expanded to include wedding bears made from bridal outfits, military bears made from uniforms, and several other variants.

“I think we touched on the sentimental value of clothing,” she said. “Everybody remembers what they wore for a significant event or something special that happened in their lives. This is a nice way to preserve it.”

In 2007 she moved back to Princeton and ran Patchwork Bear from her home. In September she moved the business into a second floor space above Greene Street Consignment at 162 Nassau Street and hired several people to help her make the bears. She says it has been a busy holiday season so far. She makes all the bears by hand, and has created almost 200 so far this holiday season. She didn’t stop even to conduct a media interview.

Cura said making a bear in memory of a child is always an emotional experience. “It’s amazing that people don’t know us, but they trust us enough to send these clothes to make the bear,” she said. She said she that she was moved when she heard the Baranowskis’ story.